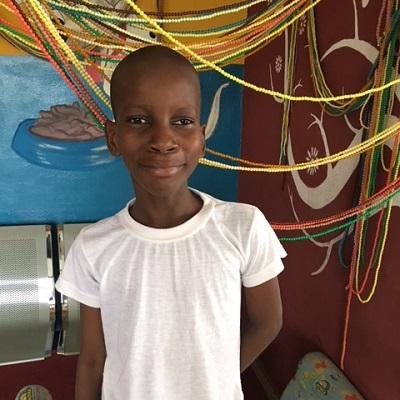 Joshua is ten years old. A Wilms’ Tumor patient since May 2013; Joshua, and his mom have been through fire. Since his diagnosis in 2013, Joshua has had eleven (11) cycles of Chemotherapy, Radiotherapy, Surgery, has had fluid drained from his chest; and more scans and tests than he can count; but he is a fighter.

In 2015, Joshua and his mom spent 8 months and 10 days on admission in the ward. The day he was discharged; his mom broke down in tears. They are both so traumatized that they live in fear of ever being admitted to hospital again. Joshua’s mother lost her business because she had to abandon her trading to stay with him in the hospital. His older sister has been out of school for a year and half and Joshua himself is eager to return to school after being out for over three years.

He loves playing games, drawing and painting. His best food is rice and fish. Joshua is a very prayerful young boy. He loves his mother so much and feels so deeply for her; that he would hide his pain because he doesn’t want her to worry. His deepest desire is to be well, so that his mother can rest from all she has been through over him.

Unfortunately Joshua gained his angel wings few month after the commencement of his treatment.