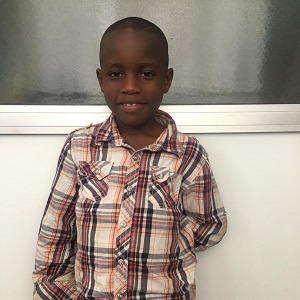 Joseph’s symptoms were early noticed. Joseph an 8 years old boy was diagnosed of Nephroblastoma (cancer of the kidney) in 2017. On a fateful Friday, he came out of school, and told his mummy that his tummy was hurting, her mother gave her some local herbs think it was just a sign of pile but to no avail.

The pain become severe and her mother noticed a mass in some part of his stomach, he was immediately rushed to the hospital, where checks were carried out and it was discovered he had tumor coming from his kidney. After series of test and scan, Joseph was diagnosed with Stage 1 Nephroblastoma (Cancer of the Kidney).

Joseph gets bored quickly and likes to stay active but his cancer diagnosis has really affected him. His greatest desire is to be healed so he can go back to school and play with his friends.

Joseph is currently out of treatment and has beaten cancer to become a survivor through prompt and proper treatment. Joseph favorite food is Eba (a Nigerian staple) and any kind of stew/soup.